A Mediation Journey Across Land Disputes

This blog piece is written by Jose M. Arraiza from Norwegian Refugee Council (NRC). MyJustice partnered with NRC to train community leaders on mediation and on housing, land and property rights.

I am sitting in a wooden bench in a village somewhere in Bilin Township, in Mon State. It is sweaty hot and humid. Someone brings a couple of cups of coffee-mix and cookies. A buffalo is roaming nearby. A villager is telling my colleagues about a sour dispute with his neighbor, who has unfairly registered the villager’s land on his own name. What could we do about it?

Home is where the heart is. People here feel a deep belonging to their land. Property disputes deeply touch people’s emotions. South East Myanmar – for years immersed in an unpredictable process of peace building, quick development and hit by humanitarian emergencies, such as floods or skirmishes between Ethnic Armed Organisations and the Tatmadaw – is plagued with land disputes.

I realized the importance of land in 2015 when I first moved to Dawei, in beautiful Tanintharyi. It was a time of ¬now-long-gone political optimism. I was then entrusted by the Norwegian Refugee Council to develop a Housing, Land and Property rights programme in the area. Getting to a minimum understanding took time. I remember the early days, sitting down with a Karen National Union Liaison Officer describing complaints by villagers about highly polluting mining projects. I would listen to people fearfully describe military camps being built nearby, awakening traumatic memories of the war. A female Karen religious leader described how a rubber company had recently fenced off a large portion of a village’s land, obliging neighbours to live within them. It was very difficult for NRC to face the government, agri-business companies or even the army.

From land registration to mediation

Our teams started by helping our shelter beneficiaries in the village of Palaw to register their land. This uncovered a new world of disputes. The boundaries and documental evidence were unclear. The persons entitled to the land use certificate were not easy to identify and the process in the Township was slow and arbitrary. Hence, we took up a very different strategy. I knew NRC had a longstanding programme of Collaborative Dispute Resolution (CDR) in several of the 31 countries it works in. I took the opportunity of a training of trainers in Dar es Salaam in Tanzania to learn about it. Then, the British Council MyJustice programme gave us a chance to start up CDR in Mon State.

Mediation as an agent of peace

Our teams and those of the Karen Development Network (KDN), quickly caught up. We started training administrators, village leaders and civil society organisations dealing with land. We trained on the basic skills and steps of mediation. We facilitated negotiation, from stakeholder mapping to developing interest-based solutions. The idea was to strengthen the negotiation abilities of communities so that they could better address their own problems. Within two years, we expanded to Eastern Bago Region, Kayah, Kayin, Shan States and Tanintharyi Region. The last time I visited one of our project sites in Kayin I sat down with a village leader. He belonged to an ethnic armed organisation (not minding the gun in his belt) who described the various challenges faced with the Nationwide Ceasefire. Peace is probably built as much from above as from below. It is a slow process. Mediation will definitely go a long way in supporting it. Now, the buffalo has passed by and our coffee mix cups are empty. My colleagues tell the villager the details of the next CDR training and mentoring sessions in the village. Soon it will be time to drive back home. 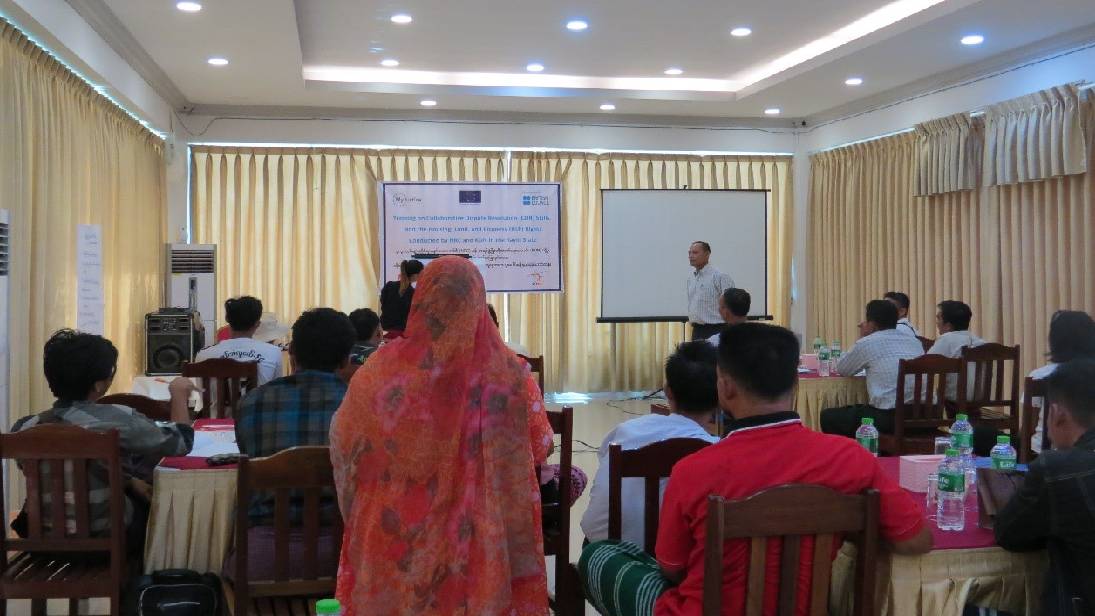